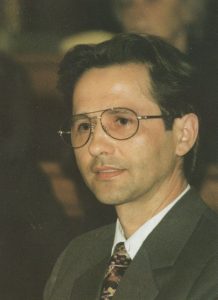 I appreciate the opportunity to discuss the position of my candidacy to publish my multidisciplinary research paper in WorldWeb, a product of years of study. I believe I have all the qualifications required to independently represent the manuscript in internet page, where amongst others, I am giving the data èCOBISS.si for Drago Karol Golli:

Biographically looking I have been working with cybernetics for a very long time, including receiving several qualifications from large corporations abroad (Germany, USA etc.) both in theory and practice, from development to deployment in the industry.

This recognition was usually reserved for 2 university professors from the area of former Yugoslavia and is only awarded once annually.

In the field of humanist sciences, I have only published one book, but it is a rather large volume with 1.200 A4 pages: Optimal Control of Corporation: Family-Corporation-Society: Philosophical-Theological-Scientifical-Political System, introducing cybernetical points of view that have been overlooked up to now to this field (see below).

With these Very Informational Papers:

I am submitting, I wish to contribute to a poorly researched area.

I hope that it will fill the unresearched area in the understanding of the cognitive stream of consciousness, as well as from the point of the history of science and technical machine, also for marketing, economy, corporative management, administration, and other theories.

I believe that my influence on the research of scientific comprehension should be reflected in all scientific disciplines in the West (Aristotle’s ‘normal’ reductionist irreversible science of the West as a Subject and Plato’s alternative dispositional traditional mitic anomalous reversible revolutionary deeping science of the East as an Object, which are duals), not only in the narrower sense of the current global crisis, where I answer the question of how a deterministic chaotic state can be cybernetically converted into a truly stable division or branching of mind worlds based or their branching off in the continuum of the Good and Evil (not Left and Right as in politics) phenomenon in various global philosophies or world views and various scientific disciplines.

The publication of this my article on Internet page not only benefits my Further Development, but would in addition provide science and political systems with a tool to understand the now existing psychological-sociological-physical Freud-Marx-Jung synthesis and the ethically preceding philosophical-political-theological Kant-Marx synthesis, both of which have a pretention to the whole world and all sciences, which would, together with cybernetics, in my opinion also resolve the socialism-capitalism or communism-capitalism dilemma.

This is in spite of the fact that the problem consists of proving immensely important philosophical, world view, religious and cosmological concepts, and even though I performed these using a mathematical principle which is known to few due to its difficulty, the Russian ultimate L. S. Pontryagin maximum principle, then, S. H. Lee’s Transition to the ultimate restored Original World, and K. D. Palmer’s Transition to ultimate New World (which is not guaranteed not to be worse).

With the persistence given only to the Individualists and nonconformists, it is, I believe, possible to achieve the goal starting from outside the borders of clichéd injury and mediocrity: to a wider, more focused, brighter, more modest and centre-stabilised world (society) through human individuals whose Physical mind and Spiritual mind must but be joined together, thereby being immensely stronger than physical forces and physical minds.

In 180o Renewal of today World in fact, what is involved is the Optimisation of Phenomenal World only (it is a control object for Pontryagin controller’s model).

I would love to find out more about the position readers are looking to fill, and would welcome the opportunity to discuss how my skills, theories and practice and ideas and results can benefit (the Russian will give the final save, and the new mathematics is needed).

The fastest and preferred method of reaching me is the phone number listed above, which also has an answering machine, or you can send a fax to the same number or a classical post or send me an e-mail: Dr.Drago.Karol.Golli@gmail.com.

Thanks for your consideration; I look forward!

Putin’s Vision and Realisation for Transition to New Metaparadigm in nedeed New Philosophy for Relations among World States, Year 1952!: